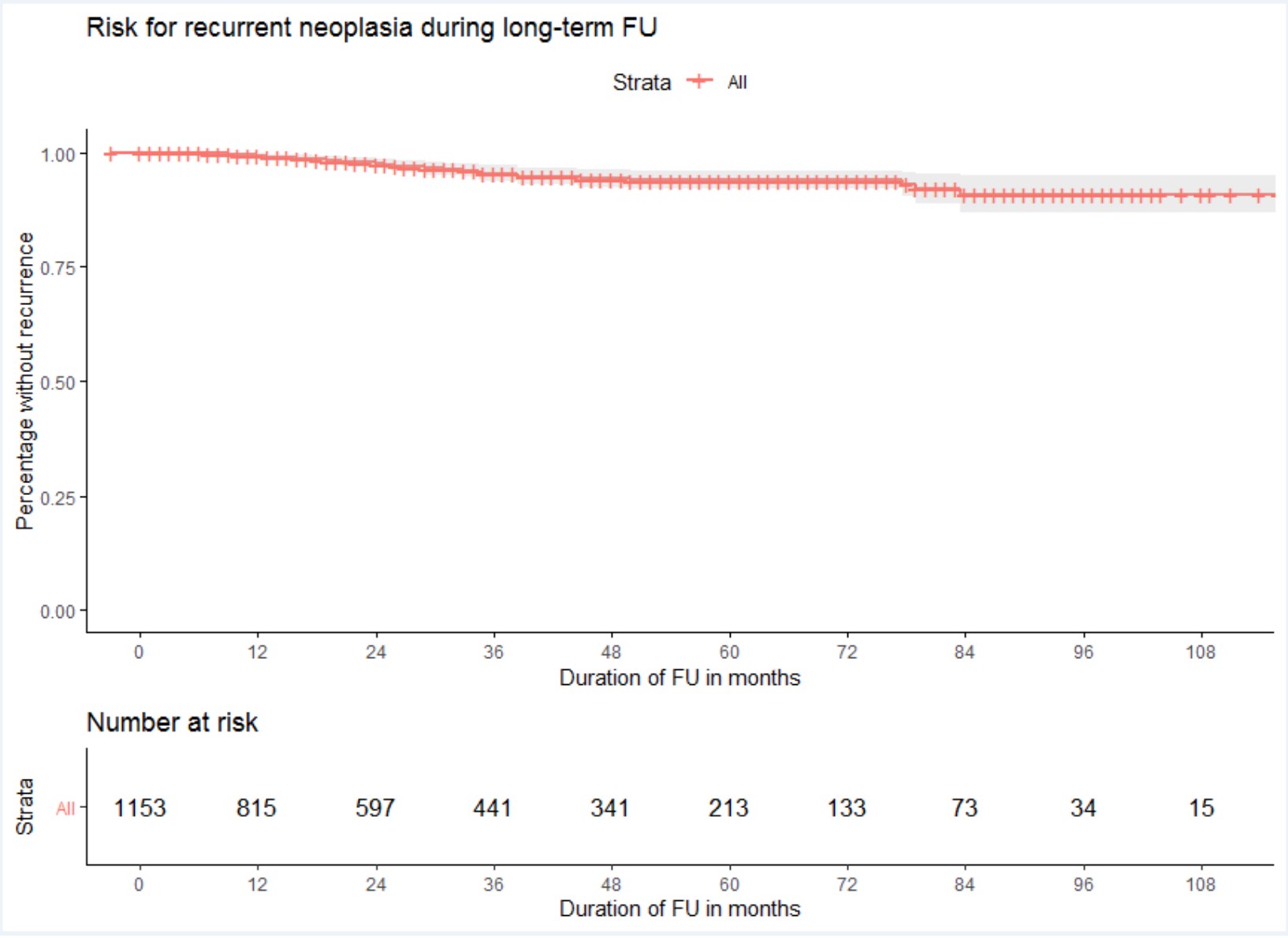 In an observational study of 1154 patients with BE or early EAC, 94% achieved complete eradication after treatment with RFA/EMR. A dysplasia recurrence rate of 1% per year was observed over a median 43 months.

Modeling suggests a role for Cytosponge in post-RFA surveillance 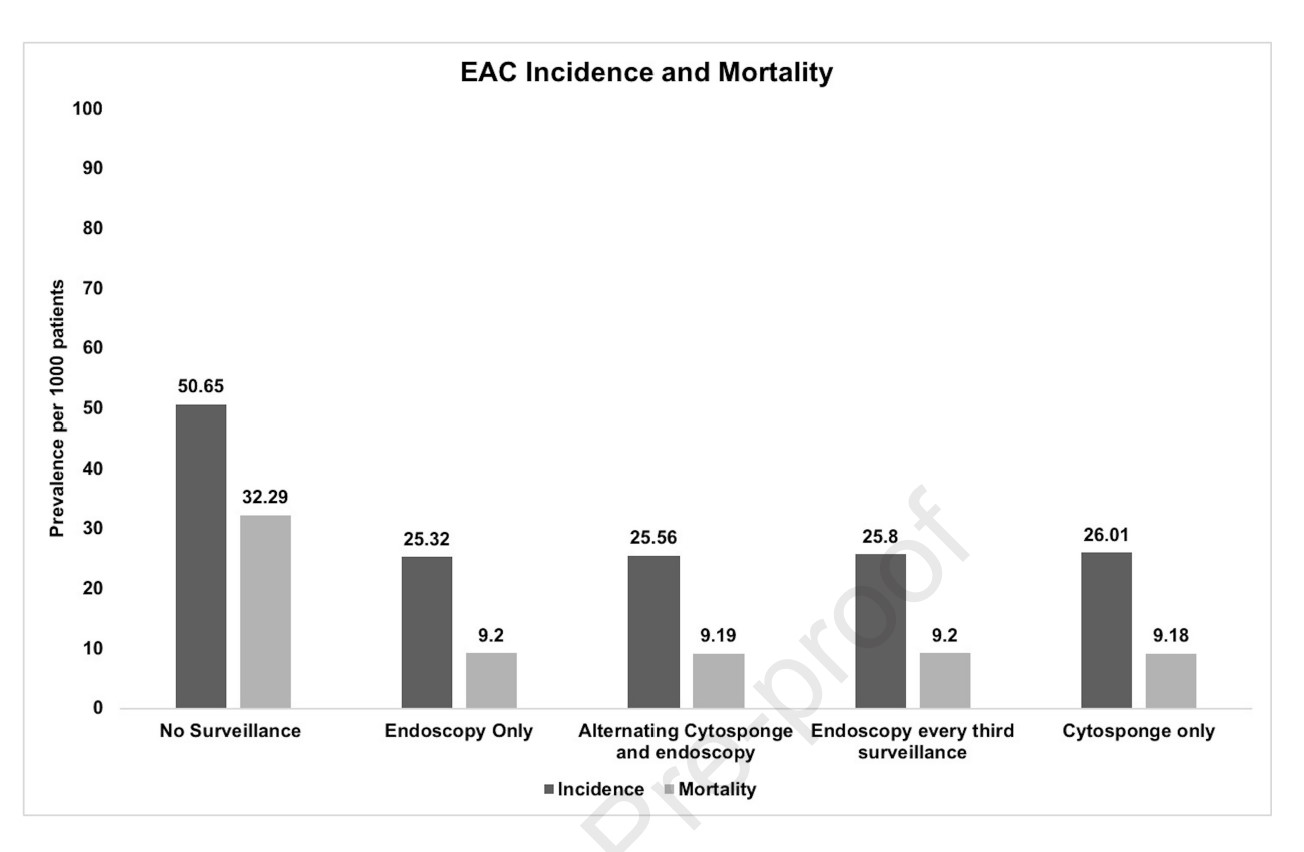 This is one of the first examinations of the Cytosponge as a non-endoscopic method of surveillance in persons who have been treated for dysplasia in Barrett's. Results suggest that it may be more cost-effective than endoscopy. 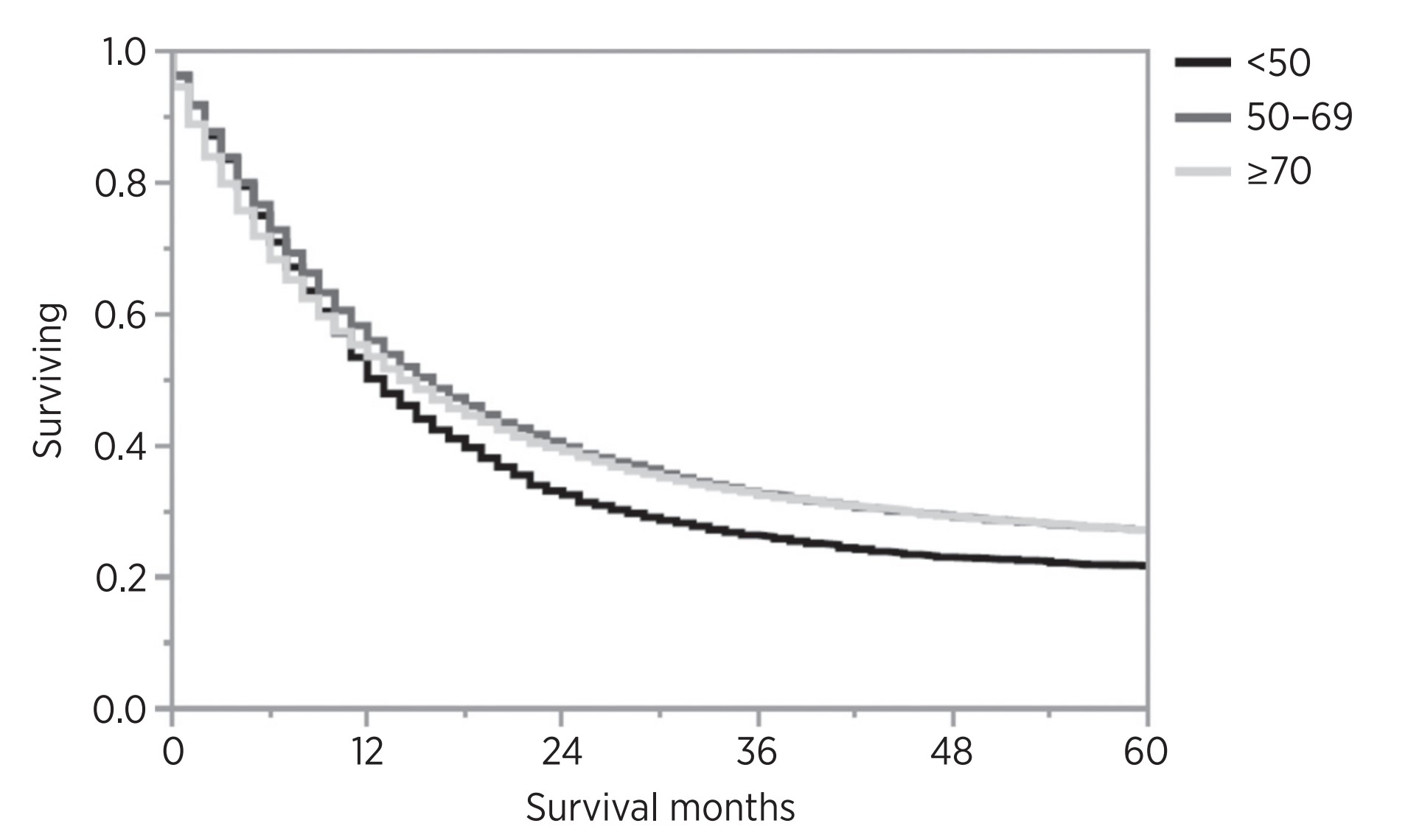 Esophageal adenocarcinoma incidence is still rising about 5% per year in both women and men in the Czech republic, along with use of PPIs.

Predictive model for progression in Barrett's 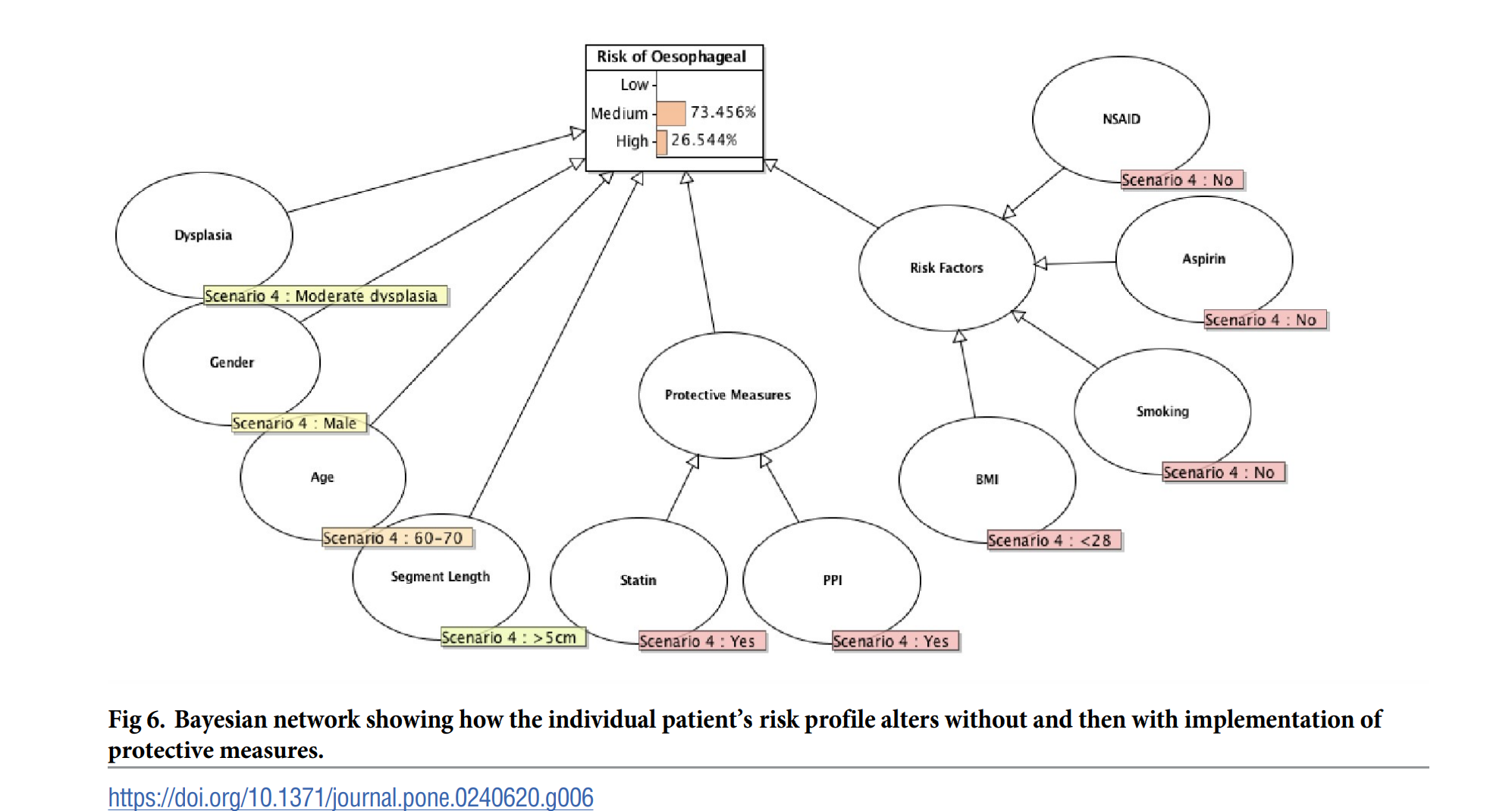 Using a Bayesian approach, these authors combine results from multiple studies to risk stratify persons with Barrett's. They also identify potential changes in risk associated with preventive measures such as statin use and weight loss.

SEER study observes strong inverse association between EAC and use of PPI, statins and aspirin 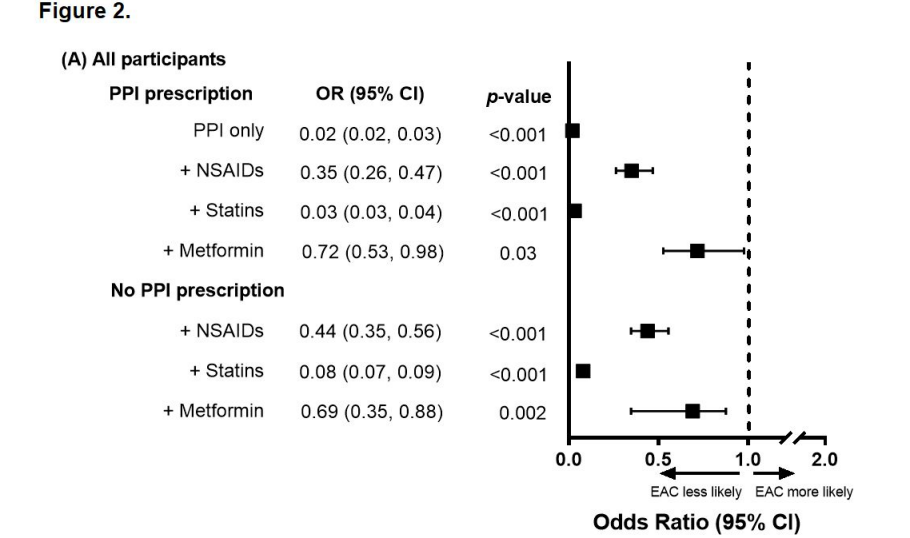 A SEER-based observational study lends yet more evidence that aspirin, PPIs, statins and possibly metformin may reduce risk of EAC in persons with or without diagnosed Barrett's esophagus. 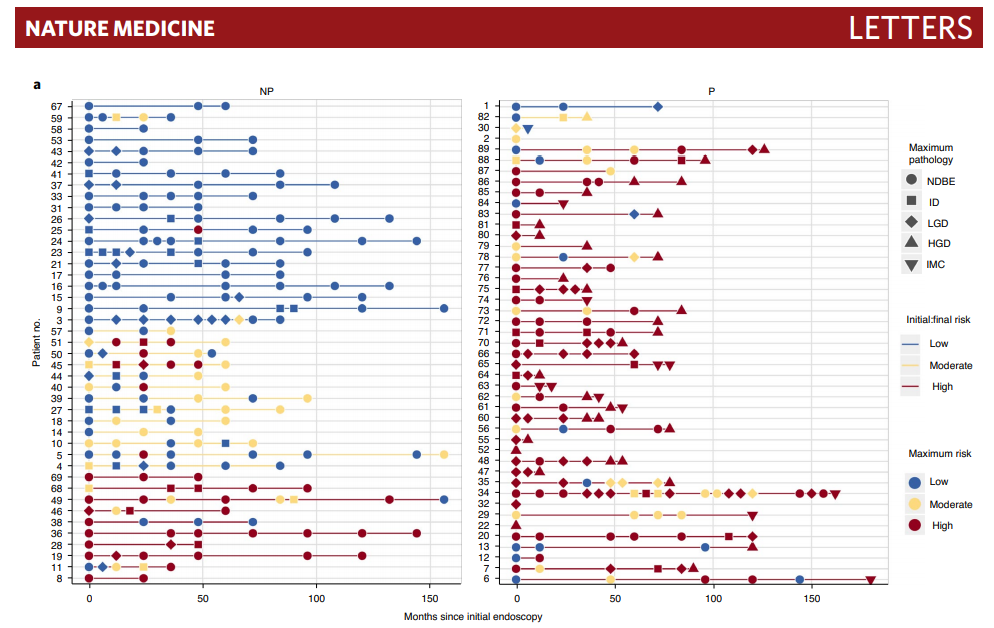 British study lends strong support to use of genomic risk stratification (genomoe-wide copy number instability) to enable earlier intervention for high-risk Barrett's and at the same time reduce the intensity of monitoring and even reduce overtreatment in cases of stable disease. 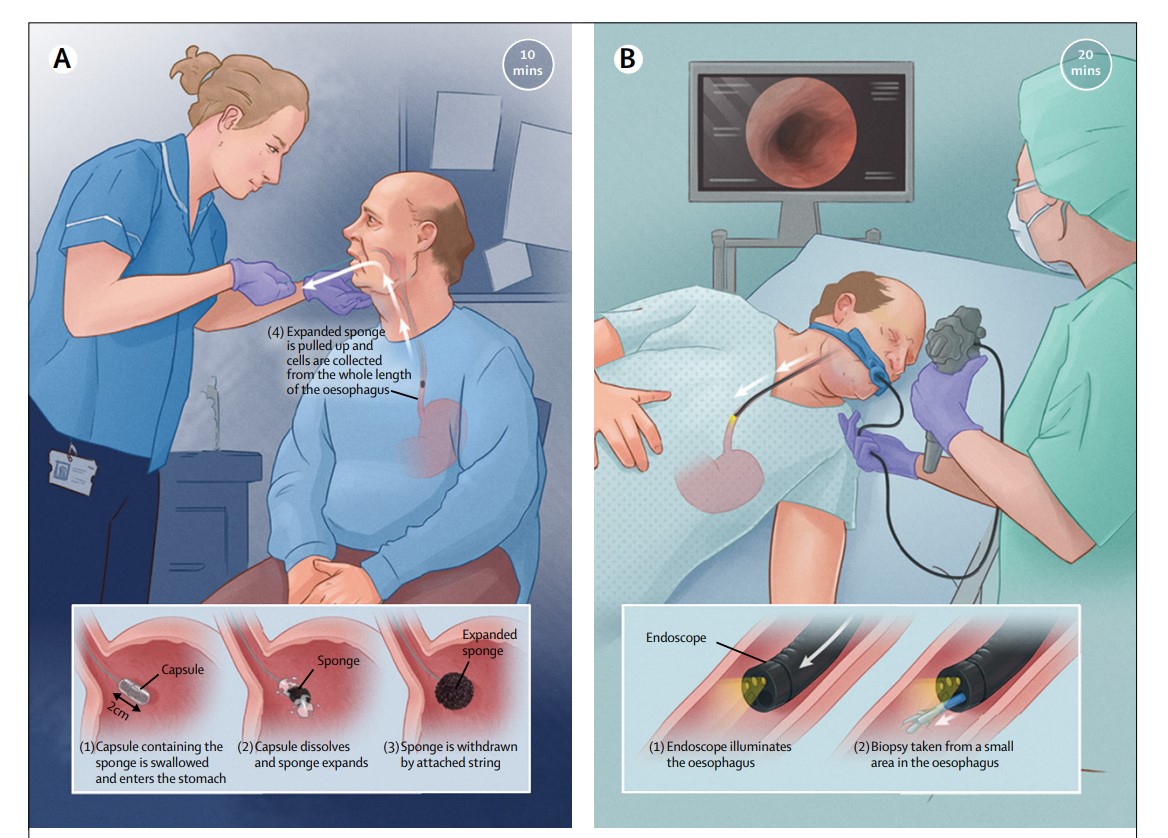 This impressive randomized trial observed an approximately 10-fold increase in detection of Barrett's with use of the Cytosponge non-endoscopic test. Nine persons in the Cytosponge group were found to have treatable dysplasia or early stage cancer vs. none in the usual care group. 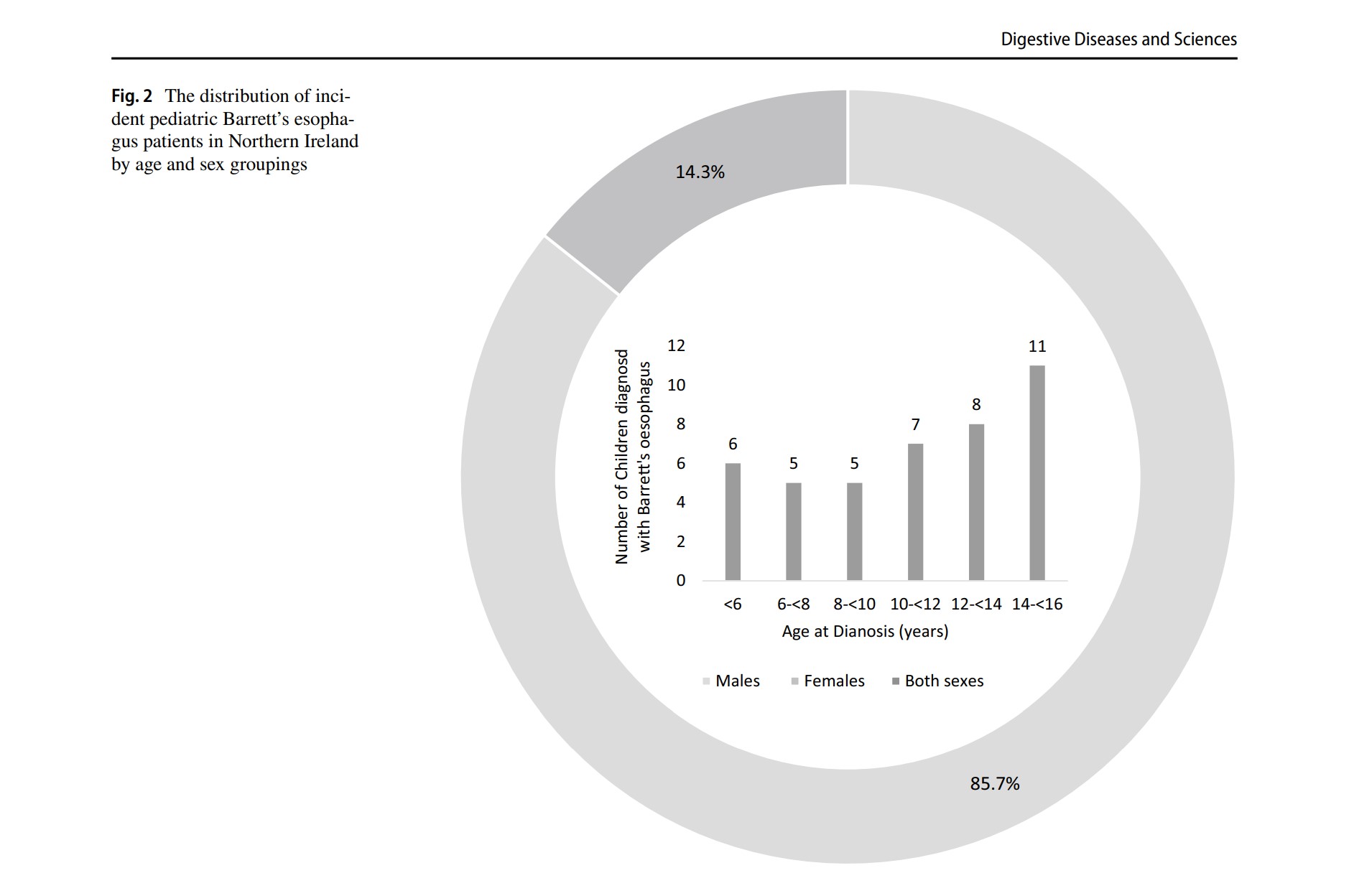 Barrett's in children does occur, but is rare. This cases series demonstrates a very strong preponderance in males. Among a very few children followed over time, several developed low grade dysplasia, but non were observed to progress to high grade dysplasia or cancer.

This study evaluated some known and suspected novel risk factors, including a history of colonic adenomas, caffeine usage, histology, and use of statins and SSRIs as predictors of progression in Barrett's.

Obesity related markers and risk of Barrett's and EA

This article summarizes published reports on circulating biomarkers and risk of BE/EAC, finding that higher circulating levels of leptin, glucose, insulin, CRP, IL6, and sTNFR-2 may be associated with an increased risk of esophageal adenocarcinoma or Barrett esophagus. 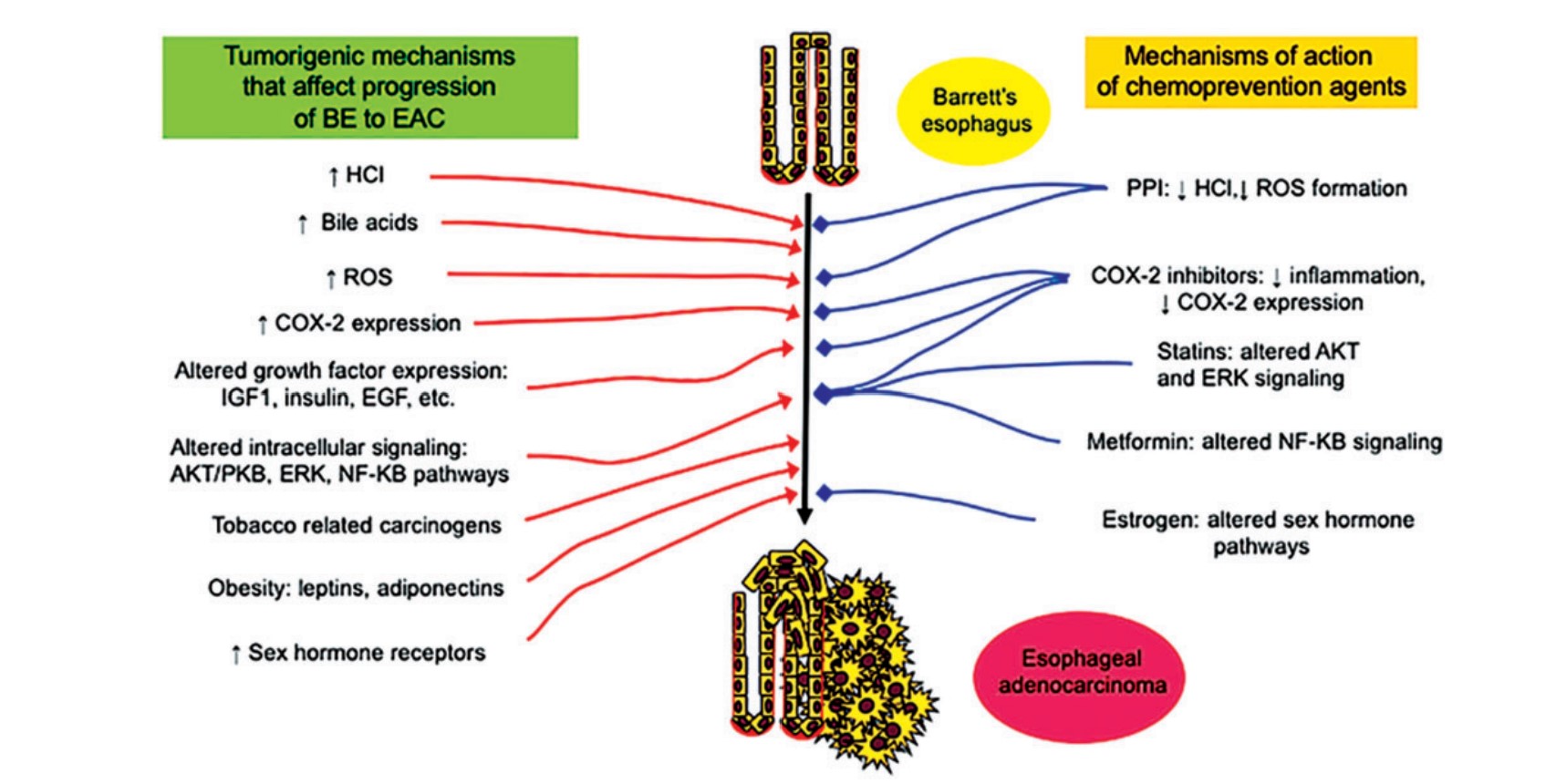 Dr. Bill Grady and colleagues review the status of chemopreventatives for progression of Barrett's to esophageal adenocarcinoma

Family history of GI cancer and risk of Barrett's

Cost-effectiveness modeling from UK indicates that endoscopic eradiction therapy for both low and high-grade dysplasia is cost-effective compared to surveillance. 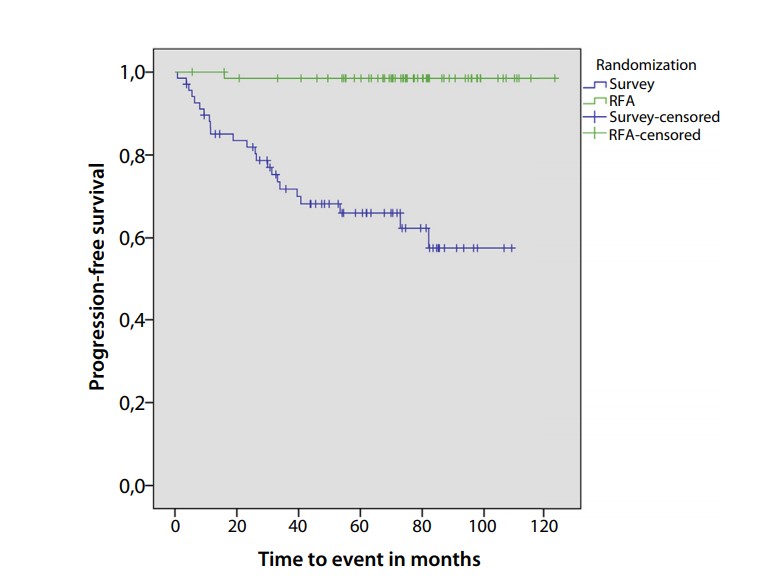 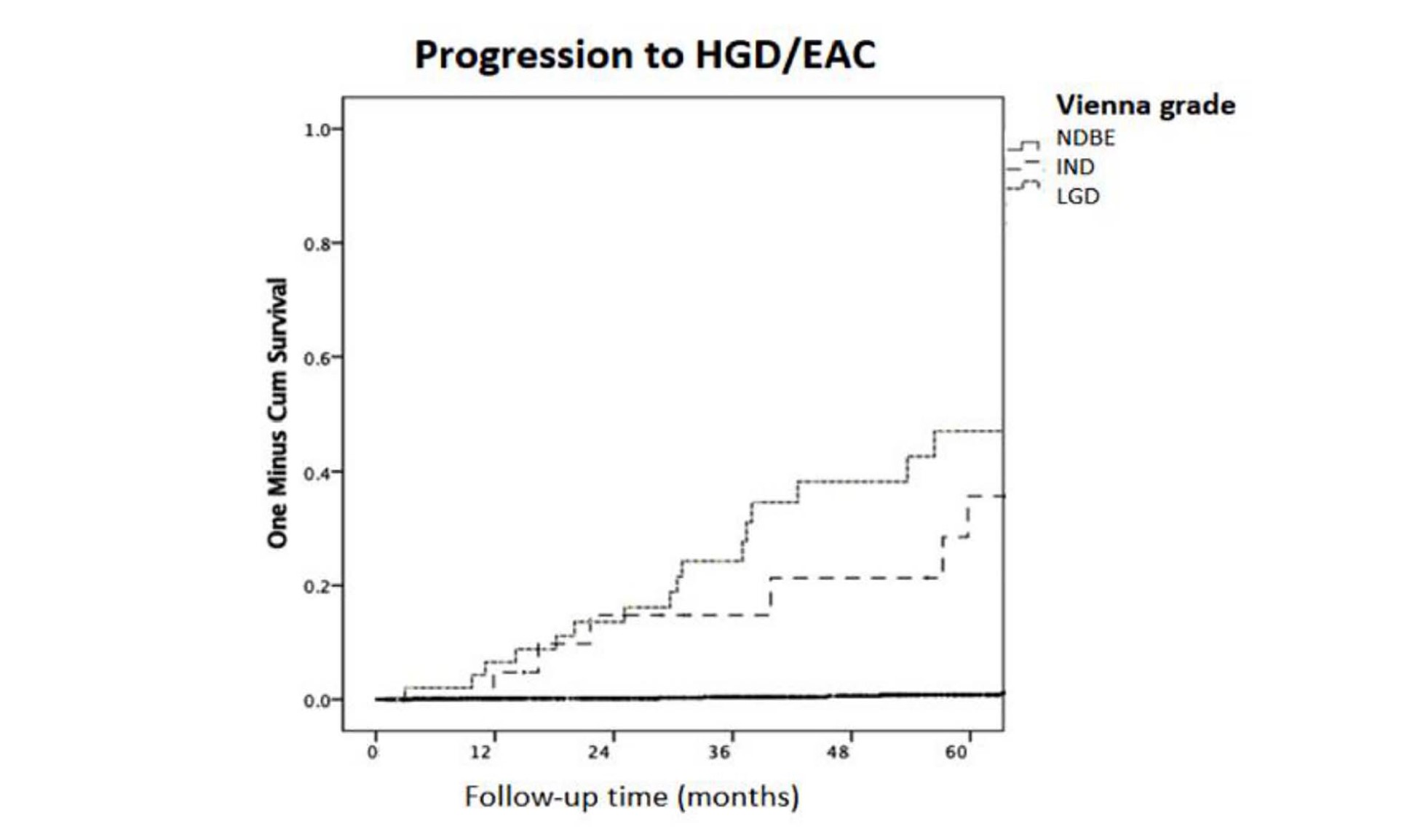 Updated ASGE Guidelines for screening and surveillance of Barrett's 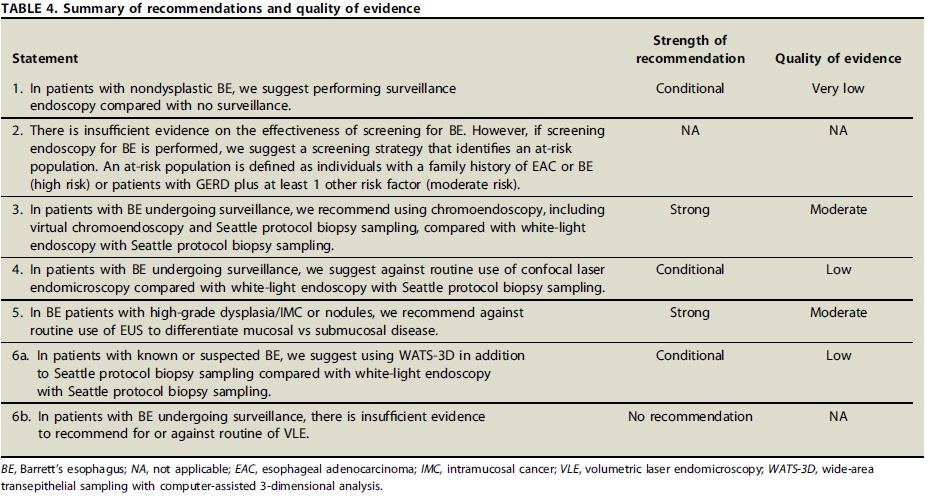 In this publication, the American Society for Gastrointestinal Endoscopy updated their guidelines for screening/surveillance of BE. 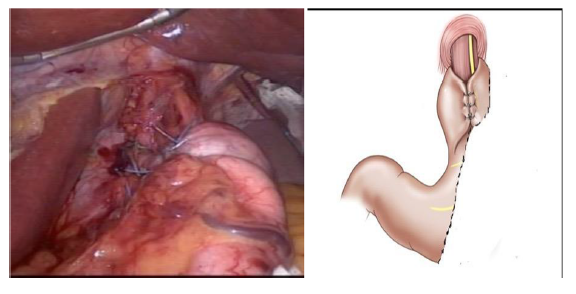 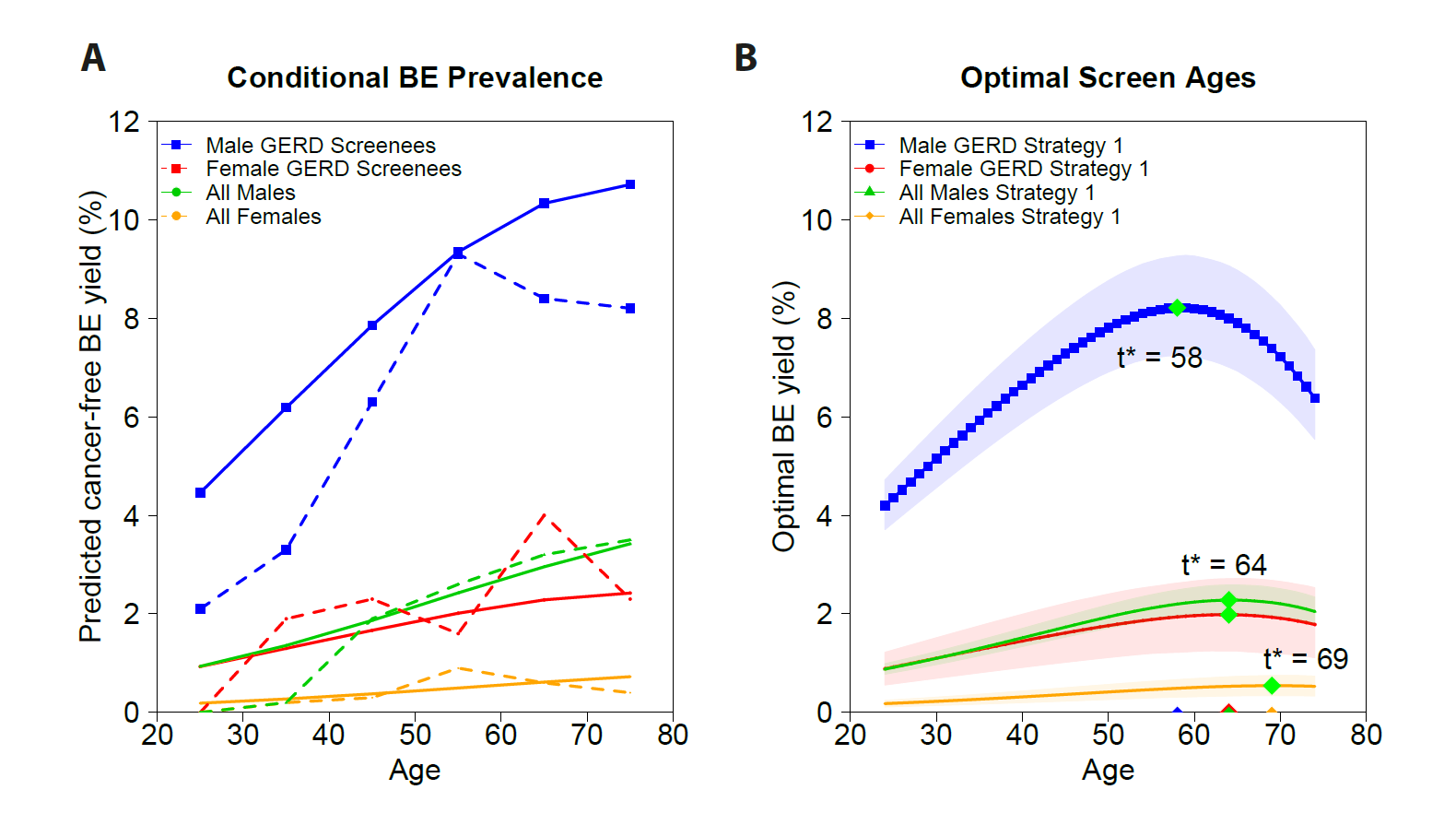 Kit Curtius and colleagues from the U.S. and India demonstrate how mathematical modeling of cancer evolution can be used to optimize age at initial screening for Barrett's and esophageal adenocarcinoma. Their research suggests that optimal screening ages for patients with symptomatic gastroesophageal reflux are older (58 for men, 64 for women) than what is currently recommended (age > 50 years.) 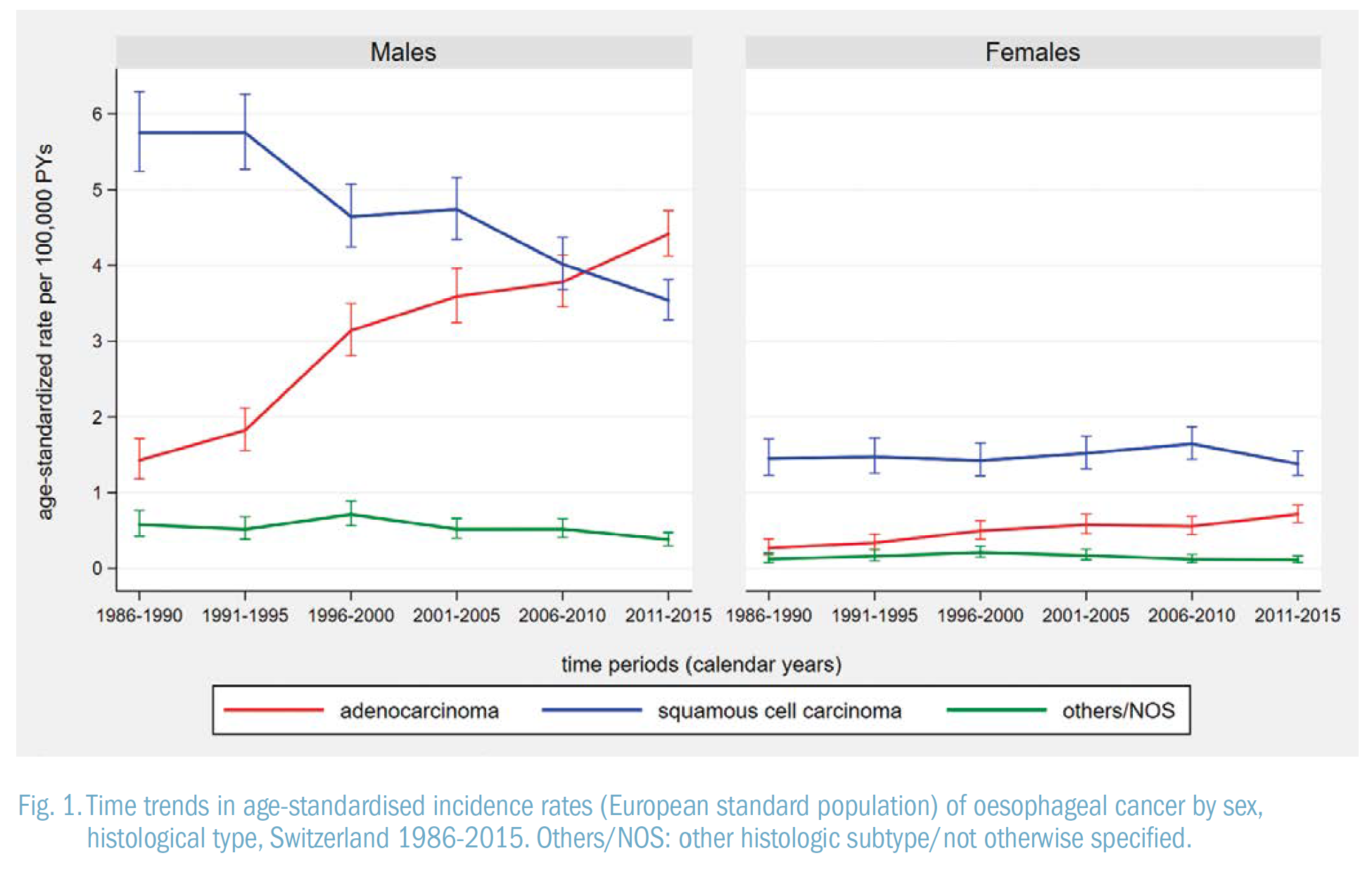 EAC became the most common form of esophageal cancer in Switzerland around 2010. From the authors' conclusions:A significant increase in the incidence of adenocarcinoma of the oesophagus was observed in Switzerland during thestudy period 1986-2015. A parallel rise of GORD and obesity over the same period may, at least partially, be responsible for this trend. For oesophageal squamous cell carcinoma, a decreasing trend was only observed in males most likely related to sex-specific lifestyle changes. 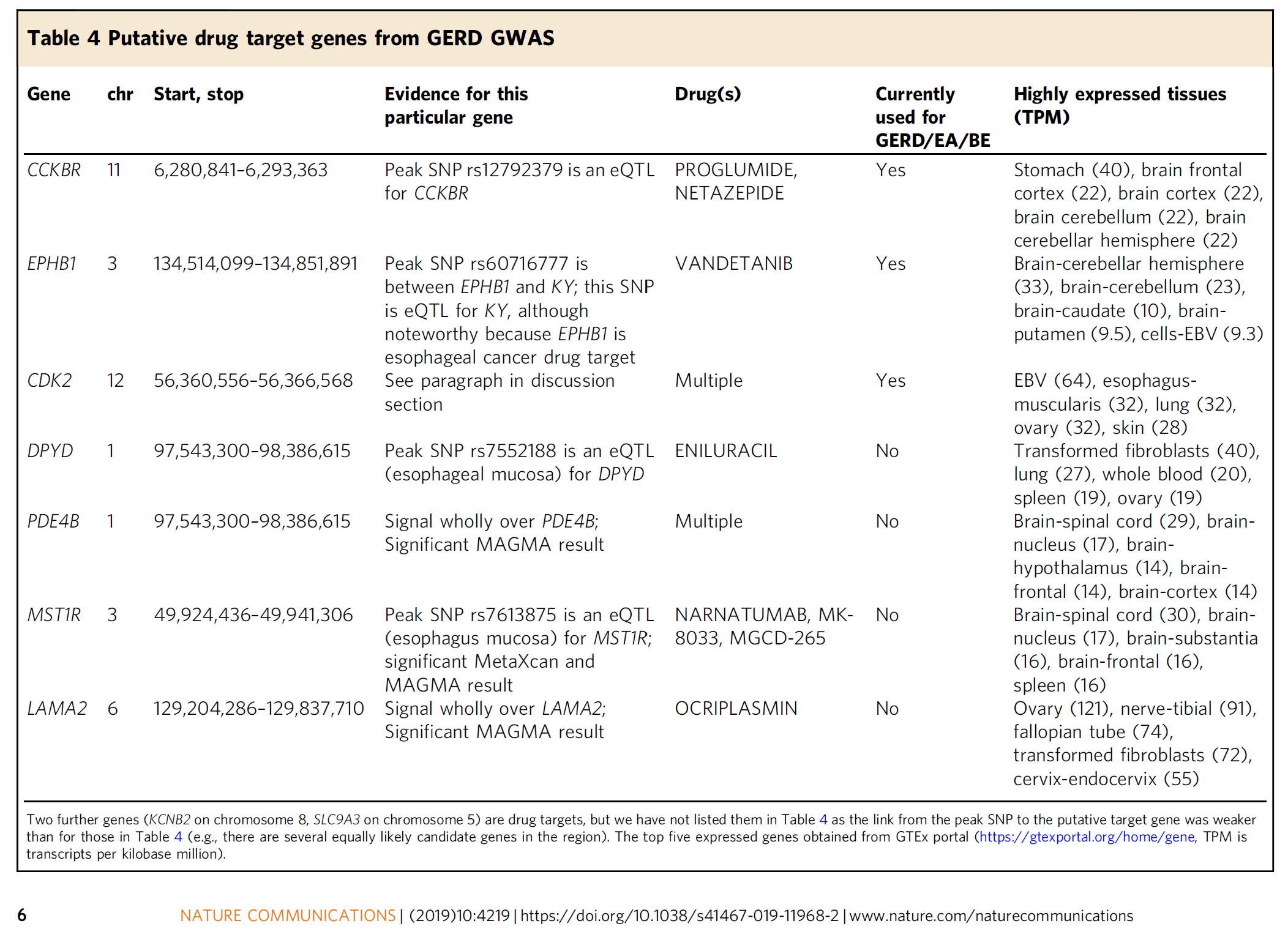 Over 350,000 records were analyzed to identify genetic markers (SNPs) and genes related to the prevalence of GERD (gastroesophageal reflux.) 25 new loci were identified, most of which also associated with increased risk of Barrett's and/or esophageal adenocarcinoma. Three of the target genes are already GERD/EA/BE drug targets and four others are drug targets for other diseases and as such would be very interesting to investigate for potential medication repurposing for reflux, BE, or EA. 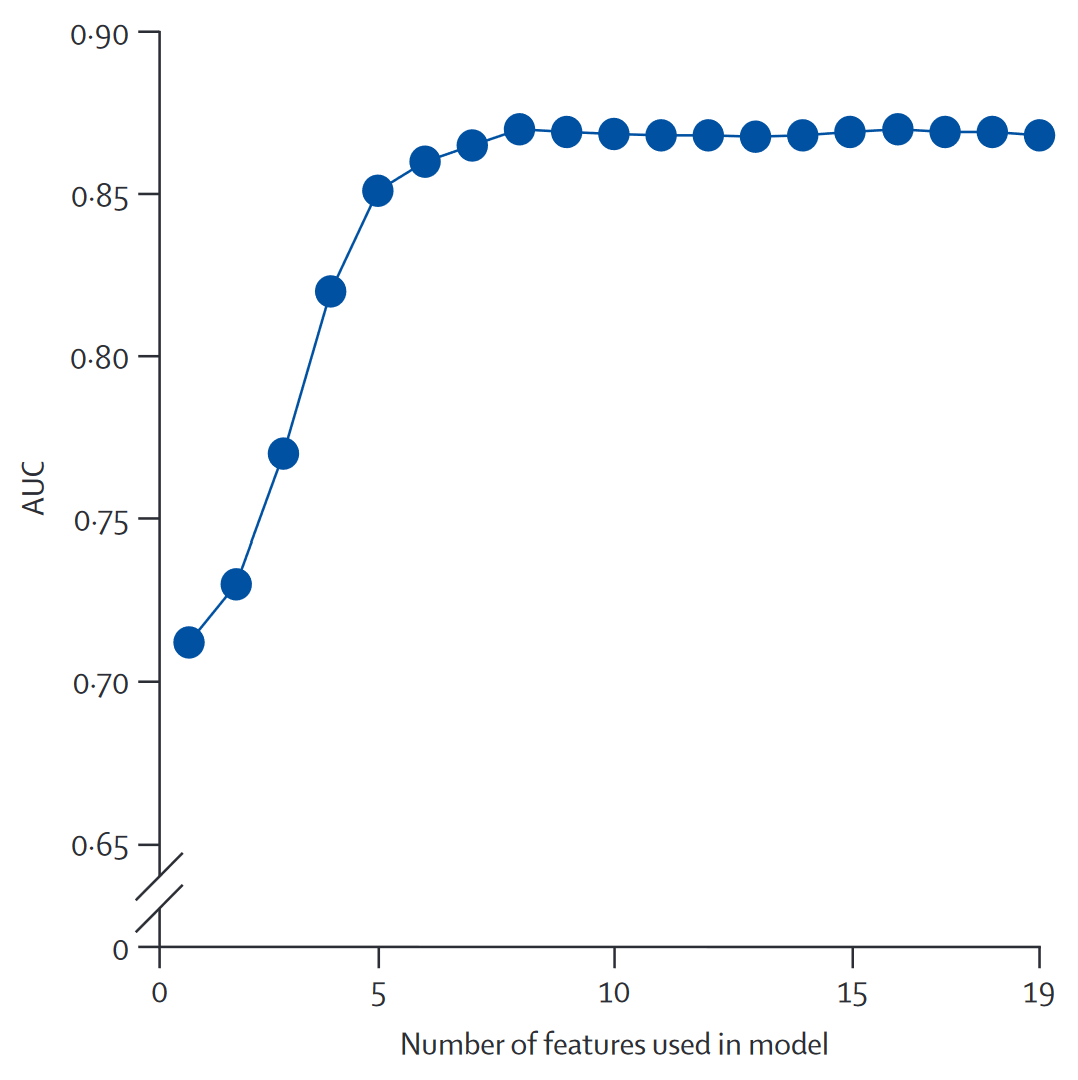 Strengths of this risk prediction model for Barrett's includes the relatively large number of cases and an external validation dataset. A limitation is that only those with symtomatic GERD (reflux) were included, so this is not necessarily generalizable to the general adult population. The authors observed that age, sex, cigarette smoking, waist circumference, frequency of stomach pain, duration of heartburn and acidic taste, and taking antireflux medication were predictive with an AUC of 0.81 in validation set.

What happens after ablation for Barrett's? 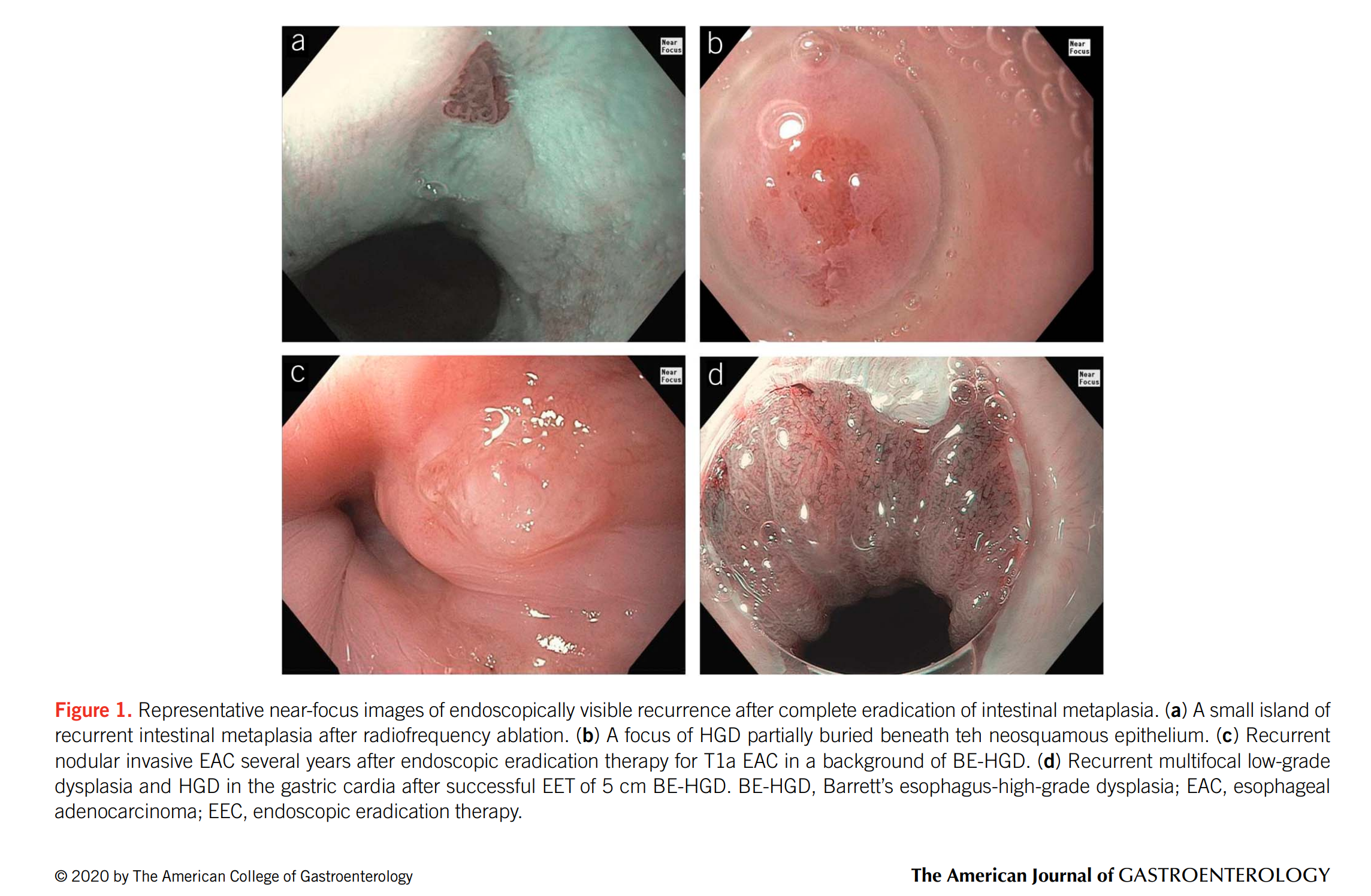 This review paper summarizes some of the current issues in surveillance and treatment after endoscopic eradication therapy (e.g., RFA) for Barrett's dysplasia. 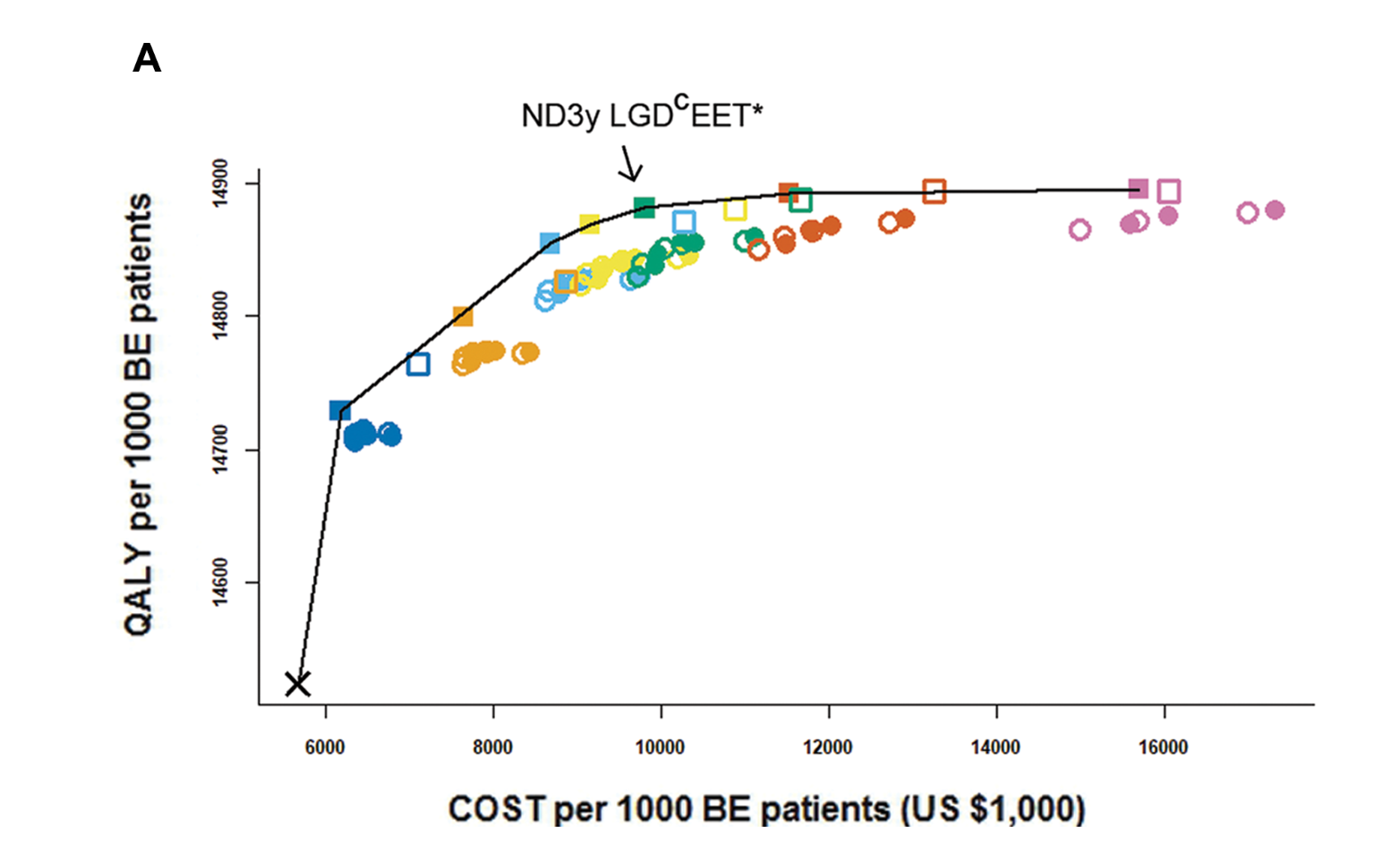